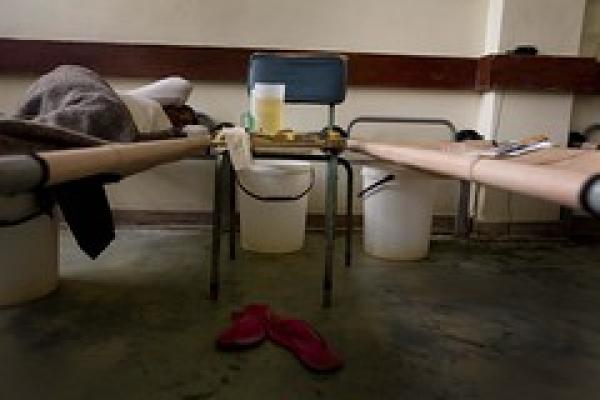 There have been multiple outbreaks of Cholera worldwide, with one of the biggest outbreaks occurring in the aftermath of the natural disasters that hit Haiti in 2010. However, nothing has prepared the world for the humanitarian crisis that hit Yemen earlier this year. A Cholera outbreak struck the country and within months most of the region had been affected and over 700,000 individuals were infected. A country already in distress from war, poverty, malnutrition, lack of sanitation and low water supply, Yemen has all the factors needed to create an environment in which cholera flourishes. The United Nations has declared Yemen in a state of humanitarian crisis. They have sent some aid but aid certainly isn't sufficient for solving the political crisis and the civil war at hand. Aid is also limited, without a political solution and enough outside support, it will be difficult to rebuild destroyed infrastructures and get the country back on its feet.

First and foremost, it is vital to understand the disease, its causes and effects in order to clarify possible solutions to containing the disease. Cholera spreads through contaminated water and food supplies by contaminated feces from a cholera infected individual. (1) Conditions worsen with inadequate water treatment, sanitation and hygiene. (1) Most people who suffer from the disease portray mild to no symptoms, but approximately “five to ten percent” suffer horribly from cholera symptoms and if left untreated can result in death. (2) Fortunately, most people who contract the disease are able to survive if there is sufficient health services available. (2) If those with the severe case of the disease are left untreated, the “fatality rate can reach 50 percent.” (2) This portrays the grim reality people in Yemen are experiencing now. (2) 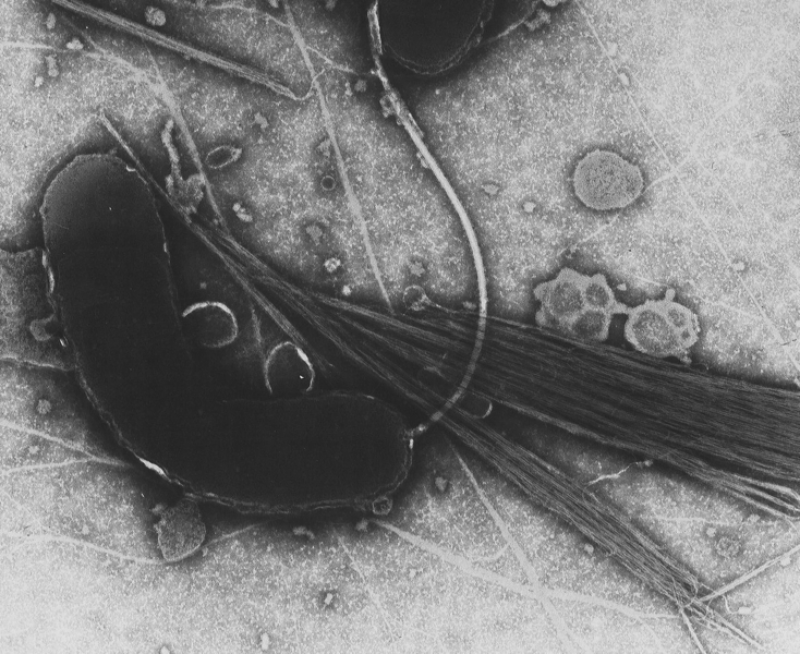 Yemen is left without effective water sanitation, monitoring and management. This is due to the ongoing conflict with Saudi Arabia and the civil war in the region. As a result, the water has been left untreated and the sewer systems have backed up, mixing with the limited water supply. Professor Ida Mirzaie, an economics professor and senior lecturer at the Ohio State University elaborates, that the situation in Yemen is “dire” and that the World Health Organization (WHO) “estimated up to 1 million people will be affected by next year.” She explains:

“The main issues are water and the sewer systems as their basic infrastructures have been ruined by the bombings. As long as people do not have access to clean water and basic hygiene, it’s difficult to stop cholera from spreading.”

Feces from infected individuals have allowed the disease to spread like wild fire, leading to the height of the epidemic earlier this year. Those who are infected with the disease experience symptoms of diarrhea, vomiting, dehydration and malnutrition.

Yemen is a relatively a poor country. Even before the war, Yemen was considered to be the poorest Arab country in the region. There was also a lack of sufficient water and agricultural supplies present. However, the water crisis in Yemen isn’t unique to Yemen, as there are many countries around the world and in the Middle Eastern region that are experiencing water shortages and a decline in water supplies. Over the centuries the land in the Middle East has been over used, farmed, grazed and irrigated. The underground water resources are depleting, and water prices are on the rise. Poor countries like Yemen are fighting malnutrition because there isn’t enough water and agriculture to meet the needs of its population. Continuous desertification is also another factor in the depletion of resources, especially agricultural resources. This is mainly due to poor land usage. Also, in some Gulf countries, there is an overuse of water and the resources may be depleted in some regions in less than fifty years. If there isn’t suitable water management, sanitation, proper land usage and efforts to fight desertification, the environment in Yemen and surrounding countries will continue to get worse. (3)

The insufficient availability of health care services and poverty amplifies the crisis. Due to the lack of access to food and clean water supplies, many families who are poverty stricken are left malnourished. This makes them highly vulnerable to getting the disease because of their weakened immune systems. In other words, poverty and malnourishment, especially among children, makes the population's vulnerability to the disease is even greater. Families who are impoverished don’t have full access to hospitals and clinics. This is due to the fact that 65% of them were destroyed during to the war. Much of this is because hospital and school infrastructures are systematically targeted by the Saudi government. (4) Most of these individuals are unable to afford transportation to go to distant health clinics and are forced to make difficult journeys to heal their loved ones. (4) Some may even have to borrow money or sell family heirlooms just to get treatment. (4)

The political situation in Yemen is another one of the main contributing factors to the spread of Cholera. The political crisis dates back to the Arab Spring. The former president, Ali Abdullah Saleh, resigned after the revolution and Abdrabbuh Mansur Hadi, former Yemen Armed Forces field marshall, was elected to office and tried to create a unity government to unite all the regions in Yemen. The Houthis--a small Shia group-- rejected the idea and gained Saleh’s political and material support from his forces. (5) They gained control of the country’s northern region and took control of Yemen’s capital Sanaa, overthrowing the government and ousting Hadi. As a result, Hadi’s government relocated to a coastal region and Saudi Arabia intervened, prompting several Sunni states to join together in an effort to reestablish their prior dominance in the region. They believe that Iran is involved in the conflict and is providing aid and support to the Shia rebels. (5) Additionally, the US, UK and France have provided military equipment and other forms of support to the Saudis to help fight against the Houthis opposition. (6)

There has been a high percentage of civilian casualties and both opposing sides are at fault. Saudi led air strikes have systematically bombarded the rebel held areas. They targeted important water, food, health and educational infrastructures, as well as a well-known port, purposefully ensuring that the rebel held region would lose majority access to their basic needs. They have succeeded in blocking the area from receiving any aid or food. This, of course, affects the Yemeni citizens caught in the line of fire. 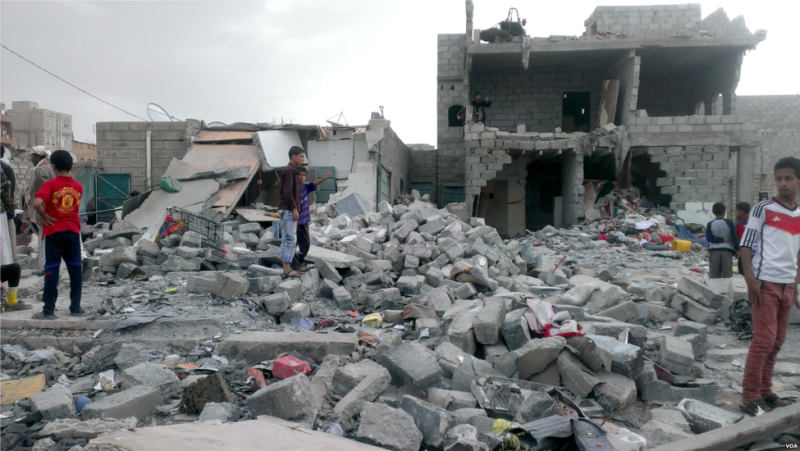 If the circumstances weren't dire enough, the government stopped paying the civil servants of the rebel held areas. Consequently, the workers went on strike for months resulting in unattended sanitation and sewer systems. (4) This led to a pile up in garbage and septic backups which contaminated much of Yemen’s water supply (4). Thus, more people suffer the dire effects of cholera in the rebel controlled region than in the government controlled region.

The percentage of people with cholera who die is 0.46% in rebel-controlled areas, compared with 0.3% in government-controlled governorates. Thus, a person living in areas under rebel control is 70% more likely to contract cholera and, if they do, 50% more likely to die. (5)

This demonstrates the level of effect that the deteriorating political circumstances of the country has on the spread of the disease. It also portrays the dire situation that many of the civilians living in the region are experiencing.

Due to the destruction of infrastructure and little to no access to medical supplies, the healthcare system is diminishing. If people are not able to get access to treatment for a treatable disease, more people will die. There are about 30,000 healthcare workers in the rebel held region. They are the backbone of Yemen’s health services, but they also haven’t been paid for a year and without health services the outbreak will continue to spread. (7) These workers need to get paid to help continue containing the disease. Organizations such as the WHO are working on the ground in Yemen, building cholera clinics and educating civilians about the disease to help battle its spread. (7) Because of their efforts, the spread of cholera has slowed, but it’s not enough to completely contain the situation.

The Obama administration, during its last year in office, banned the selling of certain types of bombs to Saudi Arabia (5). That was overturned when the Trump administration made a $110 billion deal earlier this year with the country, promising $500 million towards weapons. (5) Without collective international pressure on Saudi Arabia, the conflict will continue. This recent deal will shed light on neither a brighter future for Yemen nor a solution for the humanitarian crisis.

There will be no near end in sight if there isn’t considerable international pressure on all sides of the conflict including Saudi Arabia and its coalition of Sunni states (Jordan, Egypt, Kuwait, Bahrain, Qatar, UAE, Sudan and Morocco), the US, UK and France. The welfare of the civilians should be put first and the opposing sides should allow them their basic needs and ease the situation for them to receive required aid and supply. The WHO are working consistently to help contain the spread of cholera, but they need much more aid and funding to help with limited resources. Professor Mirzaie explains,

“It’s very difficult to evaluate what’s exactly happening on the ground because of the ongoing war. The WHO is trying to help, but how much it has access to the people who are in need of help is questionable. Because of the war, it’s difficult to get resources there. As long as there is war and ongoing violence, they are not going to take their people and resources there. There needs to be a political solution at least to stop the current conflict temporary, even if there’s not a solution to resolve the conflict permanently. This will create the minimum security for aids to reach Yemen’s population who are affected by cholera. Then, rather than relying on the Yemeni government, World Health Organization and other international organizations should provide the necessary resources and funding. This is difficult now because of the ongoing war and violence.”

The UN has declared that Yemen is in a state of humanitarian crisis and have helped in sending aid, but realistically speaking, humanitarian aid won’t be enough. There needs to be a political solution in sight to put an end to the increasing number of casualties and to help rebuild the country’s destroyed infrastructures. This process will take time due to the devastation Yemen has already experienced so far. There also needs to be more awareness and pressure from the international community on all sides of the conflict to speed the process for a political solution. International pressure is not only vital for the safety and security of Yemen’s civilians, but also for Yemen’s future.

A special thanks to Professor Ida Mirzaie for her contribution to this blog and for her passion about the wellbeing of the oppressed civilian population in Yemen.