Birth of a Nation? Analysis of the Kurdish Independence Referendum

Birth of a Nation? Analysis of the Kurdish Independence Referendum

For as long as the Kurds have existed they have been subject to non-Kurdish rule, whether it be Arab, Persian, Ottoman, British or a myriad of other nations and empires. But that long history of foreign rule may be ending soon. The government of Iraqi Kurdistan, an autonomous region in northern Iraq, has announced plans for an independence referendum on the 25th of September. To fully grasp the significance of these plans, it is important to understand the historical context of the Kurdish people as well as their intentions and aspirations.

The Kurdish people are the largest nationless group in the world. Approximately 35 million Kurds are distributed across four countries: Iraq, Syria, Iran, and Turkey (#1). They are in the minority ethnically and linguistically in every country in which they reside, although the 15 million Kurds in Turkey represent a considerable minority at nearly 20% of the Turkish population. The Kurds are linguistically and culturally distinct from their Arab, Iranian, and Turkish neighbors and practice a wide variety of faith traditions ranging from Sunni Islam to the Yazidi faith (#2). 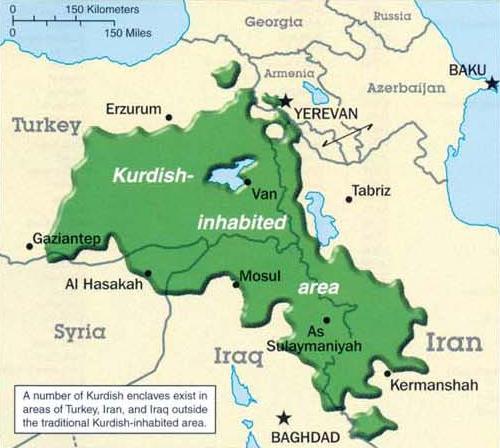 For most of Kurdish history, the group has been ruled by outside influences; the Persian empires of antiquity, the Arab caliphates, the Seljuks and then the Ottomans. Under these various empires the Kurds had varying degrees of autonomy to determine their own affairs. Beginning in the 1890s, Kurdish nationalists began agitating for a state independent of Ottoman rule (#3). Following the defeat of the Ottoman Empire in WW1, the Allies partitioned the region. The Treaty of Sevres in 1920 contained a provision for an independent Kurdistan (#4) which was to fall within a British sphere of influence. However, the Turks won their war for independence and negotiated the Treaty of Lausanne in 1923, which did not provide for a Kurdish state and established the current borders of Turkey.

“Provisions of the Treaty of Sèvres for an independent Kurdistan (in 1920)” by PANONIAN, Wikimedia Commons, Public Domain

The Kurds attempted several rebellions during the 1920s and 1930s in both Iraq and Turkey, all put down by the Turkish and British militaries. Kurdish language, music and ethnic identity were vigorously suppressed in Turkey. Kurdish separatism was revived with the establishment of the Kurdistan Worker’s Party, or PKK, in the late 1970s. This group, led by Abdullah Ocalan, has waged a guerrilla campaign against the Turkish government until a 2013 cease-fire agreement. The agreement broke down in 2015 and hostilities have been on the rise in southeast Turkey.

Iraqi Kurds have had a similar history of rebellion against the central government under the regime of Saddam Hussein. With his ouster, the Kurds of northern Iraq were able to secure an autonomous region where they could govern themselves, known now as Iraqi Kurdistan, in the Iraqi constitution of 2005. Since that time, the Kurdistan Regional Government, or KRG, has ruled the north with its own government and military while still nominally subservient to the Baghdad government.

Syrian Kurds, in recent years, have been wildly successful in repelling so-called ‘Islamic State’ and establishing their own de-facto autonomous zone in north and northeastern Syria. The Kurds of Syria are politically close to the PKK and have proven themselves to be an effective fighting force. They have also engaged in armed confrontations with Turkish military units sent into northern Syria in August of 2016.

Iranian Kurds have been the least active of the general factions in terms of military and political action. Recently, however, the Kurdistan Democratic Party of Iran, or KDPI, have stepped up their efforts in the months leading up to the Iraqi independence referendum. These actions have resulted in clashes with Iranian security forces and intensive shelling of the border regions (#5).

This long, complex, and often bloody history has led to the upcoming referendum this September of 2017. This represents the best opportunity for Kurdish independence in nearly a century, and the outcome of the independence referendum is hardly in doubt.  The Kurds will vote yes, but before they can claim their independence there are multiple obstacles which they must navigate. Chief among these are concerns over natural resources, political fragmentation, diplomatic apathy, and opposition from most of the world, as well as the potential for new conflicts.

Defining national consciousness can be a difficult task. Such a consciousness centers on shared history, language, and culture. However, in today’s world, such identity can be more complex than it would seem. Diversity, an important aspect of modern life, is a significant factor to be navigated when achieving a national consciousness, whether it be in Iraqi Kurdistan or anywhere else in the world. It has come to the author’s attention that the title of the article series may contravene the spirit of just co-relations in diverse countries. “Birth of a Nation” is a title shared by a movie released in 1915 which promoted white supremacy. The title of this article is an unfortunate coincidence, and was in no way intended to allude to the film. The spirit of the article is rather to explain to a wide audience the current national aspirations of the Kurdish peoples of the Middle East, and in Iraq in particular. The goal of the Middle East Studies Center has been, and remains, the education of the public concerning the nuances and diversity of the Middle East and North Africa regions.