al-Qaeda is Rising in the Wake of the Yemen Crisis

al-Qaeda is Rising in the Wake of the Yemen Crisis 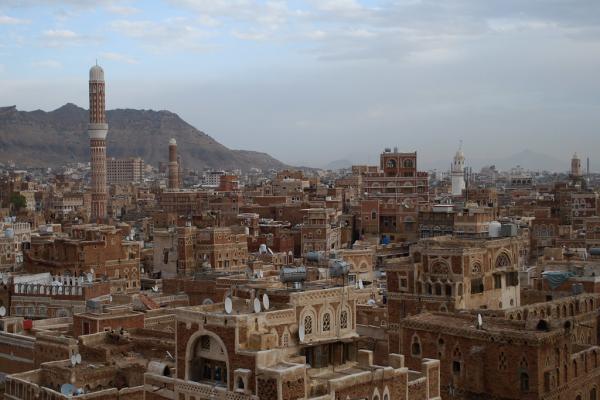 An Arabic version of this article is available here.

Al-Qaeda in the Arabian Peninsula (AQAP) is on the rise in Yemen, coalescing power from the grassroots level to form a de facto government. Since the popular uprisings in 2011, Yemen has devolved into a full-blown civil war, and this has directly resulted in the renewed rise and evolution of al-Qaeda in the Arabian Peninsula. The group has taken advantage of the chaos in a weakened and fractious state to control territory and at times govern cities, including from 2011-2012 in Zinjibar and in 2015-2016 in al-Mukalla.  The map below of the most current situation in Yemen shows territory controlled by AQAP in white, compared to territory held by the many other groups involved in the civil war. The majority of al-Qaeda’s territory held throughout the conflict has been in the southern part of the country, with Zinjibar and al-Mukalla both located on the southern coast. This article will explain the context and background of al-Qaeda in the Arabian Peninsula, how AQAP has found a new haven for its operations in Yemen’s failed state, and how AQAP presents a significant emerging threat to the world as a whole. 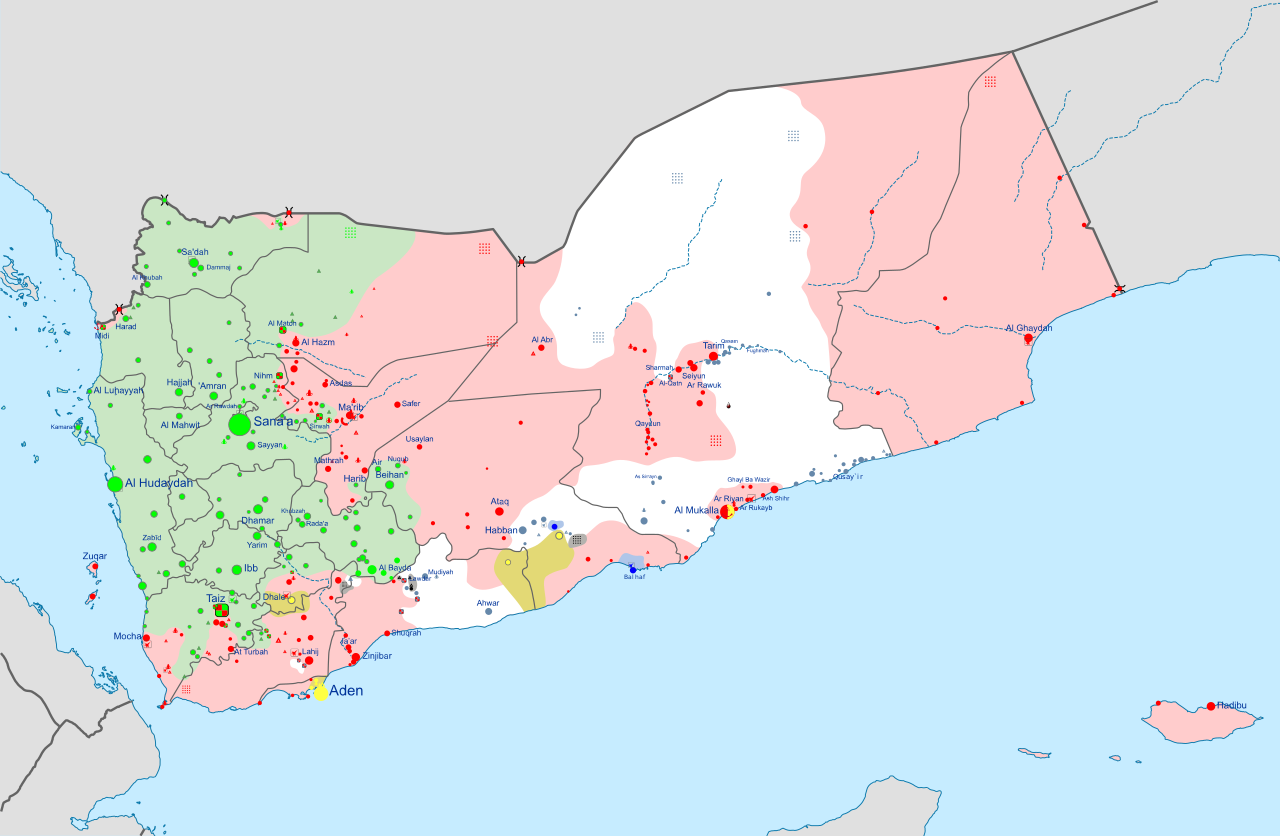 Map of the Military Situation in Yemen as of 12 February 2018. By Ali Zifan, based on Yemeni Civil War detailed map. CC BY-SA 4.0.

Territory controlled by al-Qaeda is represented in white, the Houthis in green, the Hadi-led government and allies in red, the Southern Transitional Council in yellow, the Islamic State in gray, and local non-aligned forces in blue.

Coming up on its 30th anniversary, al-Qaeda represents the longest-standing jihadist terrorist group to threaten the world today. Founded in Afghanistan, al-Qaeda now operates regional affiliates to expand its reach across the Middle East, including al Qaeda in the Islamic Maghreb (AQIM), al-Shabaab in East Africa, Jabhat al-Nusra in Syria, and arguably its strongest branch since the onset of the Yemen crisis, Al Qaeda in the Arabian Peninsula (AQAP). Al-Qaeda in the Arabian Peninsula has always held strategic importance being the ancestral home of the Bin Laden family, and serving as the logistical hub for terrorist operations such as the 1998 US embassy bombings, the location of the 2000 attack on USS Cole, and the strategizers and financers for the Charlie Hebdo attacks in France.[1]

What is unusual for a regional affiliate of al-Qaeda is that AQAP is known to target the West and U.S. homeland directly, rather than focusing on regional jihadism in the Arabian Peninsula as its name would suggest. In addition, AQAP produces an online jihadist magazine Inspire in English to target potential Western recruits, encouraging them to carry out jihadist attacks in their home countries.[2] al-Qaeda in the Arabian Peninsula has always been of strategic importance to al-Qaeda, and though it struggled in the past to evade Saudi and American counterterrorism, the failed state in Yemen has given al-Qaeda in the Arabian Peninsula a new haven in which to grow its operations since 2011. This presents a significant emerging threat as AQAP grows larger and more resilient to counterterrorism operations, and the extent of this threat has been somewhat overlooked while the U.S. and other world powers have focused more on combating ISIS in Iraq and Syria.

The January 2011 uprising against President Ali Abdullah Saleh caused dissent and unraveling within Yemen’s Armed Forces (YAF), leaving a power vacuum that AQAP was quick to fill. By March of that year, AQAP was in control of large areas of the governorates of Abyan and Shabwa, declaring an Islamic emirate in both.[3] By May 2011, they seized the capital town of Abyan, Zinjibar, and governed this city for a year. It was during this year that AQAP was able to gain critical experience in how to govern and implement Islamic law, and test how far they could push their rule without the native tribes they governed uprising against them.[3]

After Saleh’s former vice president Abdrabbuh Mansur Hadi failed to unite the country, Yemen plunged into a full-blown civil war in 2015, with AQAP emerging as the largest beneficiary. According to a 2015 report by the U.S. State Department, AQAP had quadrupled its size to 4,000 members in just one year since 2014.[4] In April of 2015, AQAP took over the port city of al-Mukalla, Yemen’s fifth largest city, as well as the southern half of the Hadramaut governorate.[3] AQAP again was able to govern and implement Islamic law, though this time learning from their mistakes made in 2011-2012. During their rule over Abyan in 2011-2012, AQAP leaders implemented all aspects of strict Islamic law at once, and this ended up backfiring against them. The AQAP government punished people harshly for crimes against their version of Islam, targeted well-liked tribal leaders who were deemed non-compliant, and restricted the trade of a very popular mild narcotic known as qat.[3]

In al-Mukalla, AQAP implemented Islamic law gradually, and made a greater effort to enmesh itself with local councils and tribes, allowing themselves to govern from a distance while implementing public works projects, social services, and even festivals.[5] When al-Mukalla was retaken by UAE/Saudi forces in 2016, AQAP was able to withdraw just before their offensive in order to avoid a bloody battle that may have reflected negatively on their rule. In a report on AQAP from the International Crisis Group, they discuss how residents in AQAP-controlled areas viewed their rule in a positive light:

According to a Mukalla resident in 2015:“We view the Council positively, because it has managed to continue to pay government salaries …. It has kept public services at a much better level than what is available in the rest of the county …. The AQAP judicial system is fair and swift and therefore preferred over the government’s corrupt system. Many prominent cases that had lingered for years were resolved in a single day.” [5]

AQAP is not the only jihadist group that has sought to take advantage of destabilization in Yemen, with the Islamic State (IS) attempting to grow its presence there beginning in 2015. IS has perpetrated several bombings and suicide attacks in Yemen, yet it has failed to seize and control territory or develop a significant following in the country. This is likely due to the fact that IS has failed to include Yemenis in its leadership, in addition to its brutal tactics including mass killings and mosque bombings that are at odds with societal and tribal norms.[5] In contrast, AQAP has included local tribes and Yemenis in its governance and operations, and has taken note of the populace’s aversion to overt brutality and adjusted its techniques accordingly.

Al-Qaeda in the Arabian Peninsula is a potent terrorist organization that has proven its capabilities to carry out attacks against the West and control territory in Yemen. While AQAP has lost some ground since 2016, and currently seems to be focusing more on its regional strategies, it should not be interpreted that AQAP no longer poses a significant threat to the US and the world as a whole. The group is growing and maturing its strategy, as it continues to benefit and become more resilient due to the continued crisis in Yemen. This is true through its continued enmeshing with local tribes, refined governance, and public appeal that will only make combatting AQAP’s physical and ideological threat to the world increasingly difficult. As the conflict in Yemen remains ongoing with seemingly no end in sight, AQAP will continue to flourish in strength and further propagate the destabilization of Yemen.

[1] Byman, Daniel. Al Qaeda, the Islamic State, and the Global Jihadist Movement: What

[3] Horton, Michael. “Fighting the Long War: The Evolution of Al-Qa`Ida in the Arabian

[4] Bureau of Counterterrorism and Countering Violent Extremism. Country Reports on