"Kuja Meri?" (Where are you going?): Afghan Refugees Across the Globe, Screening of photos and video footage, with photographer Joël van Houdt 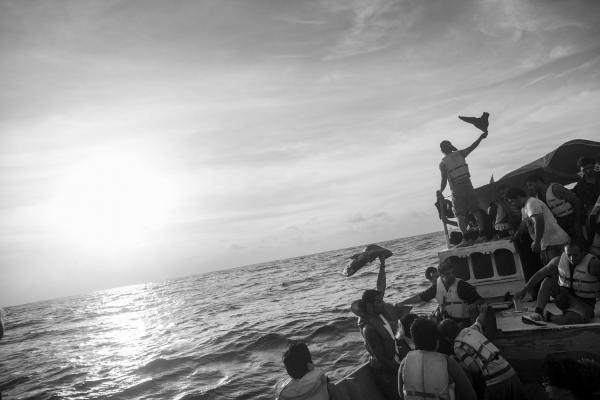 All Day
Location
Wexner Center for the Arts, Film/Video Theater

“Kuja Meri?” (Where are you going?): Afghan Refugees Across the Globe

Join us for this very special opportunity to view images of Kabul and the Afghan diaspora. This is one of the opening events for On the Front Lines: Performing Afghanistan, a project directed by Lesley Ferris. Dutch photographer Joël van Houdt moved to Kabul in 2010 and witnessed, at first hand, the soaring optimism created by the US surge in which money and human resources (well in excess of 100,000 foreign soldiers stationed there) were pumped into the beleaguered state. By the time van Houdt left in 2015, the optimism had turned to utter hopelessness. The question his Afghan friends most routinely asked him was how to leave the country. Between 2013-2017, van Houdt documented the journeys of Afghan refugees around the world. In Afghanistan, there is a dearth of information about the reality of the refugee experience. In an attempt to address this, the photographs were exhibited in London at the Kings Place Gallery (2017) and a second time, working with the Afghan ArtLords, the large-scale photos appeared on the blast walls in the center of Kabul (see video).  Invited guests will join Joël for a discussion of his work which is being seen for the first time in the USA.  This event is free but we ask that you obtain a ticket through the Wexner Center.

Joël van Houdt, currently based in Moscow, is an award-winning photojournalist. His most recent exhibition took place in Katowice, Poland as part of the 2018 United Nations Climate Change Conference.  For this event he was commissioned to document the melting permafrost in Russia’s Sakha republic.  His long-term interests include Afghanistan, migration and the countries of the former USSR.

Photo and video footage screening, "Kuja Meri?" is part of a larger project to bring Afghan women’s voices to the public more prominently through storytelling and theatre. The project, On the Front Lines: Performing Afghanistan, is directed by Lesley Ferris, Art and Humanities Distinguished Professor of Theatre at Ohio State University. Palindrome Productions produced several of the plays in London prior to this project. The first three plays, are based on stories written for the Huffington Post by Afghan women journalists who completed training through Sahar Speaks.  Now Ohio State University is home to this project which will engage and build an intellectual community around the issues brought up in the plays.